The following account of Ganesh Chaturthi celebrations in New York looks at the whole thing so differently from what we are used to - so many things that we take for granted seem very quaint and exotic when viewed by an "outsider".
All rituals have meaning because of the social and cultural contexts with which they are intertwined. What is an "arati" to us is a "corpulent man waving a plate with lamps in front of a stone image" to someone else. Shorn of their context, most things lose their meaning. Conversely, we can invest meaning into our daily activities by converting them into rituals, and adorning them with a lot of context. Would a prayer be as effective if it were not done after a bath, facing east, to our favorite deity, at a particular time of the day, with the same mantras repeated every day? None of these things is strictly required in order to pray, but they help in creating an atmosphere that aids mindfulness, and the associated meanings that we impose on this daily act through various social and cultural means adds to the significance of the daily act.
If things attain significance once they are rooted in context, and if that context is so easily destroyed when taken into a different time or a different place, is it any wonder then that the world is getting more and more dissatisfied and stressed? The last few decades have seen a massive erosion of context with people moving away geographically, contextually, and culturally from their roots. Of course, people create new contexts and rituals, and nowadays most of these revolve around the social media and other forms of "virtual" communication. But then, by its very nature, the essential context, that of meeting people in person, and knowing others "whole" is lost; what we now know of any person is only a "part" based on the context in which we interact.
And we wonder why the world is not getting any happier...
dinesh
(article on Ganesh Chaturthi as seen  through the eyes of a Westerner attached) 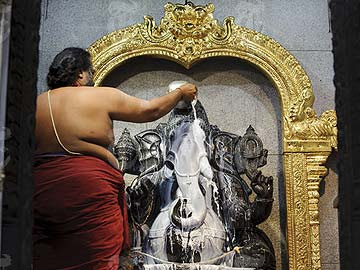 NEW YORK:  Dr. Uma Mysorekar lifted the coconut above her head and dashed it against the gray granite floor of the temple, shattering it into pieces.

A riotous orchestra of ringing bells, thumping drums and the oboelike shehnai reverberated in the cool predawn air. A piercing call emanated from a silver-tipped conch shell. And a semicircle of onlookers, draped in magenta, saffron, violet and burgundy, clapped as if in chorus.

At the Hindu Temple Society of North America, in Queens, this week is time to worship Ganesh, the elephant-headed, many-armed deity who is believed to remove obstacles. Here, as at temples in over a dozen countries, Hindus are celebrating Ganesha Chaturthi, which marks the god's birth (and rebirth).

"The coconut shell is like the human ego," said Mohan Ramaswamy, who teaches at the temple. "You have to crack it open before you can let in the lord."

In Queens, which has one of the largest Hindu populations in New York, more than 10,000 people will pay homage during the jubilee, which started Friday and ends Sunday. More than 400 gallons of milk, 100 boxes of apples, 50 crates of bananas and 5 kilograms of sandalwood paste will be used.

And each day, dozens of liters of ghee, clarified butter, will be ladled into the fire pit for the homam, or fire ritual, which is believed to carry offerings to the deity. Visitors will consume some 50,000 prepared meals, according to the organizers.

At the Ganesh Temple, ancient traditions are carried out with a relentless, New York-style efficiency.

On Saturday, volunteers and staff members wearing laminated "May I help you" name tags and white T-shirts bearing the temple's logo used iPads to check the schedule, which was detailed on the temple's website. In the courtyard, rows of devotees repeated hypnotic hymns asking the lord for his protection as they faced a large fire pit. A bare-chested man with a clipboard and a counter was on hand to ensure that the requisite 400,000 mantras were offered.

Inside the main hall, flat-screen televisions broadcast live-streaming video of each ceremony. Devotees sat cross-legged on the polished granite tiles as a corpulent priest wearing only a maroon lungi, or sarong, poured plastic jugs of whole milk into a silver cup before splashing it on a 3-ton black stone effigy in the center of the room.

Roman Garcia, who has been a janitor at the temple for 11 years, moved about the room with a bucket and a broom. The refuse will be taken away in a specially ordered sanitation truck, he said.

"The goal of all of these rituals is to gain the power of the vibrations," said Mysorekar, a gynecologist and the temple's president. "A temple is not just brick and mortar. It's filled with energy."

Lakshmi Sundararaman, 75, from Queens, who volunteers on the decorating committee, said that in the past women would spend hours with a needle and thread making garlands to adorn the hallways and statues. But two years ago, they opted for a more modern option.

"We outsourced to India," she said.

According to Mysorekar, the temple spent about $100,000 on last year's events, and individuals donated money or materials. Each prayer ritual, or pooja, has a suggested offering ranging from $11 for one day of chanting to $3,500 for the ceremony in which the large stone statue will be cloaked in gold armor.

In the food distribution area, where plastic containers of tamarind or yogurt rice, sweet carrot paste and pickled lemon were on offer, tables were set up to advertise temple activities: Sanskrit lessons, a march for breast cancer, math and spelling bee classes. Banner advertisements for the Bank of India hung on the walls. Over the loudspeaker, a recorded announcement reminded attendees how to donate.

For the closing ceremony Sunday, a silver chariot bearing a 3-foot effigy draped in garlands will tower above the crowds as it wends its way down Kissena Boulevard and Main Street in Queens.

Like Easter for Christians or the High Holy Days for Jews, Ganesha Chaturthi can be as much about the community as it is about worship.

"Of course it's a religious thing," said Sumanth Murthy, 29, who works for a hedge fund. "But it's also a chance to see people you haven't in a while."

Murthy was wearing a white lungi trimmed with elephants, and a blue polo shirt on top. Since moving to America from Bangalore, he said, it had been hard to stay in touch with his Indian heritage. Temple activities are a way for him to "balance two different lives."

For the next generation of devotees, they are an opportunity to practice religious duties. At a special chanting ceremony for children, 9-year-old Siddhaarta Venkatesh clasped his hands and shut his eyes tightly as he recited the mantras.

"Ganesh is my favorite god," he said before explaining how he learned the mythology behind the deity's elephant head, and how Ganesh saved the river goddess by tricking a dwarf.

He said, "I Google 'Ganesh stories in English.'"

Email ThisBlogThis!Share to TwitterShare to FacebookShare to Pinterest
Labels: trends