A good article (attached at the end) on how Modi will slowly get co-opted by the bureaucracy into being part of the establishment. The same establishment that he set out to cleanse will slowly pull him into its embrace and he will not be able to resist.

Wanting to cleanse any system is like entering quicksand to save someone who is sinking. You find yourself sinking instead; and as everyone knows, the only way to escape sinking into quicksand is to lie down flat and not resist!

The young always want to change the system; they are extremely agitated at what they perceive to be grave injustices and with their idealistic view of the world, not yet tainted by practicality, they set out to change it. Those who are not crushed by the grinding wheels they set out to stop in their motion, are seen a few years down the line, as part of the very establishment they set out to subvert. You can put it down to lack of tenacity, or paucity of will, or in several cases, the power of the system to corrupt those who come in contact with it. One has to admire the young preacher who sets out to cleanse the morally corrupt world – he has to withstand a lot of blandishments if he has to remain uncorrupted himself. I guess the vows of poverty, chastity, and obedience help!

What about the rebel organizations fighting for a cause? The ULFA's of the world? The best cure for them is to give them a shot at power and all its attendant privileges.  The organization soon becomes a pale shadow of its former self, with the erstwhile revolutionaries fighting amongst themselves for the spoils of power.

The lone man who sets out to reform the system, out of a sense of outrage, has the best chance of winning. Till he forms an organization and surrounds himself with a coterie. Then his aims become subservient to the group as a whole, and he has a lot more at stake. He will soon be suffering from stress, with reduced immunity, clad in a permanent muffler and continuously coughing, visiting Jindal for a bout of nature cure treatment. The world which used to follow his every act of protest against the establishment, will now equally avidly follow his health travails. From the theater of the grand, it is soon reduced to the theater of the trivial.

Meanwhile, a former Panjandrum is accused of being complicit in corruption, during the time when he was PM, no less. The whole establishment has a stake in ensuring he is not convicted, the current PM included. We can rest assured that nothing will come out of it; the establishment seeks to protect its own; even birds of different feathers flock together when it comes to safeguarding their  jungle; the winds of change are not allowed to blow too strong, for if they do, they may sweep away everything in their path!  Meanwhile, the ruling classes will stage colorful dharnas , and voice vociferous protests; all this serves to keep the population entertained.

The Romans had cracked it long back.  Keep the population busy with bread and circuses, i.e.,  give them enough to eat so they may not come on the streets, and keep them entertained with stupid, sometimes gory, entertainment programs. They will leave the ruling classes alone to continue their rapine and plunder.

And the odd chaiwallah who manages to climb all the way to the top, and still shows signs of his old combativeness – what to do with him? The establishment has an answer for that too – unleash the bureaucracy on him. They will soon grind him to dust, and he will be history!

http://www.business-standard.com/article/opinion/t-c-a-srinivasa-raghavan-prime-minister-modi-ban-gaya-gentleman-115030700006_1.html
It happens to all prime ministers. The bureaucracy first makes them; then it breaks them
T C A Srinivasa-Raghavan  March 06, 2015 Last Updated at 21:49 IST 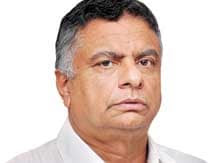 When he stormed the Raisina Hill citadel of the Indian Administrative Services (IAS) - and other allied services - last May, socially at least Narendrabhai Damodardas Modi was a rank outsider to Delhi. He was, as the ladies of Edwardian England would have said, "that awful man".Mani Shankar Aiyar echoed that view perfectly, both in tone and text. He still does with his facial expressions when he appears on TV.For the aristocracy - landed, corporate, caste or in the case of New Delhi, bureaucratic - the awfulness arose from middle-class values, at whose centre lay scruple, propriety and moral conduct. For those who call the shots, these things are inconvenient.Mr Modi, however, wasn't from the middle class. He was, if anything, from much lower down. In any case, Delhi's arbiters had already declared him persona non grata.So Mr Modi was least bothered by the dos and don'ts of Delhi's eyebrow-raising class. But, alas, that corner room in which he now sits in South Block has an unfortunate tendency. It moulds its occupier in ways that he or she has never agreed to be moulded.It is, in many ways, like an anulom marriage, which happens when a person marries someone from a higher status, either in class or caste, more usually the latter. He or she then acquires the rights and graces of the caste or class into which she (or he) has been married into. In the West, they call it upward mobility.This is what has happened to Mr Modi in the short time that he has been in office. By becoming prime minister, he has married the bureaucracy, till his defeat does them part.Be warned, SirIt is early days yet, but the signs are all there that he is getting captured by the ladies' maids of the government. The bureaucracy is slowly but surely creating a new Modi persona.This Mr Modi is allowed minor defiance and to smirk on TV, as long as he docilely obeys on the larger issues. It is a pleasure to watch the taming.As always, the behavioural norms are being imposed by the same tongue-clucking, the same instilling of fear and the same classic words: "It is just not done." Et inconveniens est.So, without perhaps realising it, Narendra Modi is becoming a gentleman. Give him a few more months and he will become indistinguishable from the people he professes to despise.To understand the ongoing transformation, it is necessary to understand that in Delhi only the power elite really counts for anything. This elite is very tiny and comprises officers of the rank of joint secretary and above in just four ministries - home, finance, external affairs and defence.The other officers of similar rank matter, of course, but they are the lesser nobility. Politicians, even ministers, don't matter at all.The main job of the core elite is to either first try to wear the prime minister down, or if that doesn't work, frighten the daylights out of him (or her). Few prime ministers realise what's going on and how they are being had.The weapon used for wearing down is called "process". It consists of internally and logically inconsistent rules, which the bureaucracy has made to cover its ample backside. Nothing stymies prime ministers more than these rules. They become helpless like beached whales.As for frightening the prime minister, three weapons are used. One is calculated leaks. The second is malicious whispering campaigns. The third, which no prime minister can ignore, is the use of slanted intelligence inputs.The prime minister's goose is properly cooked if all three begin to happen at the same time. You can ask Manmohan Singh.What Mr Modi can doMr Modi now needs to ask himself: if the Cabinet makes policy and the legislature the laws to give those policies legal sanction, who makes the rules for carrying out the two? The bureaucracy.And this role is always used by it to subvert the legislative intent and policy purpose. It is called "file ko ghumana" (make the file go round and round in a web and welter of process for years).A prime minister, therefore, needs to take on the bureaucracy not by transfers alone - those are essential and important - but by severely curtailing its power to make rules. Not one of them has done so till now. All have rued it.How is this to be done? Simple: ask the National Institution for Transforming India (NITI) Aayog, which is not doing anything useful now, to vet the rules. Unleash Professors Panagariya and Debroy on the babus.They will fight back viciously as always. But this is Mr Modi's great chance to cut off their spinach, its power to make rules. If he doesn't, because they have started to frighten him, well, then as the Gabbar Singh said, "Jo dar gaya, woh mar gaya."

Posted by Dinesh Gopalan at 8:26 AM